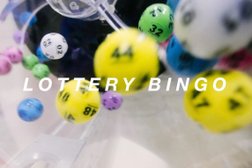 To help raise some funds for the club and at the same time for you to be in with a chance of winning some cash, we are hosting a game of lottery bingo.

If you haven't heard of or played before, it's really simple!

Everyone who enters picks six numbers ranging from 1 to 59 and pays £1 per week.

The numbers from the National Lottery Saturday draw are then used to mark off any corresponding numbers you selected from your initial six.

The next week you pay another £1 and if any of your remaining numbers are included in the draw you again get to cross them off. This continues each week until someone has crossed off all six numbers.

Some rules apply:
- Each Saturday's main lottery numbers will be used to mark off against your chosen numbers. the bonus ball is NOT included. The first person to get all six numbers wins the pot
- For Administration reasons there is a minimum payment of £5 (which will cover five weeks for one line - you can pay more if you want and if the pot is claimed any remaining money will be used towards the next game)
- You can have more than one line - just remember to pay for them all
- If you don't pay, your numbers won't be included and the prize will be passed on to the next person who claims all six
- Anyone consistently not paying on time will be removed from the game
- If more than one person gets all six numbers on the same day, the pot will be split between them
- A weekly update will be given via our website and social media to let you know how the game is progressing along, with the current total of the pot
- The pot will be split 50/50 between the winner(s) and the club

The first game will start with the National Lottery draw on Saturday 13th February so please make your selections and payments before play commences.
Please Note: Once a game has started you will not be able to join until the pot has being claimed and a new game is ready to start.

You've got to be in it to win it! Good luck!